- Cassidy Freeman estrella invitada en "Once Upon a Time": 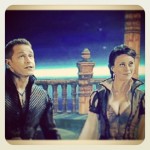 [spoiler]Q) What are the recent projects that you are working on?

A) I am currently filming the second season of "Longmire." It's the contemporary Western that I have been working on for the A&E Network.

Q) What made you originally want to be a part of "Longmire?"

A) I was finishing up "Smallville" and it was pilot season so I was looking at new shows. This pilot came up and I read it. I thought it was really different. We were on a cable network, which is always different than the main networks. It was a slower paced show, it took its time and wasn't trying to do a million things in one episode. I really like that! I also liked that my character was the daughter of the lead sheriff in Wyoming. She just seemed really down-to-Earth and had a lot of ways about her that I could relate to really well. The show is shot in Santa Fe, New Mexico, but it is set in Wyoming. I spent half my life growing up in Montana and so it just felt really close to home.

Q) What can you tease will be new this season on "Longmire" and with your character Cady Longmire.

A) This season, my dad (who has been the sheriff for a while) is running against Branch Connally. That's kind of exciting! My character was regrettably romantically involved with Branch (Bailey Chase) so there is a little bit of a question. I broke up with him, but there is drama about being romantically involved with the guy who is running against my dad. The other thing is that my character's mother had passed away a year prior and she was told it was due to cancer, but at the end of season one she found out her mother had actually been murdered. Season two is a lot of how Cady is dealing with that new information and how she is going to re-filter how she feels about her mother's death. It's also about how she can forgive her dad for not telling her that.

Q) What continues to challenge you about your role?

A) It's heavy emotional things that she is going through and, yet, she's not someone who necessarily holds her heart on her sleeve. So, it's fun to have these really deep heavy emotions and you have to kind of let them simmer. You can't just show them all the time. It's the complexity of her hiding the way she really feels and the moments she lets herself really feel them is interesting for me as an actress.

Q) Was there anything about the role of Cady that wasn't originally scripted for you that you added to the character?

A) I think that's a constant balance between the actor and the executives. What's really lovely about this show is I feel they hired us not only because we look the part or we did a good audition, but also because they felt we could bring something to it and we could kind of help shape the people that these characters are. What is cool is that the show is actually based on mystery novels written by a writer named Craig Johnson and he's from Wyoming. These characters exist in eight books and even though the show doesn't follow the books book-by-book, it basically takes the characters and creates new scenarios and storylines based on them. I think that's really cool because those that were fans of the books can watch the show and see something new instead of worrying about if they got it right or being upset because it wasn't how it was written in the book. They kind of let go of that pretense and just understand that they are taking these incredible characters and giving them new storylines. It grabs fans of the books and brings them to the show and it grabs fans of the show and takes them back to the books.

Q) What have been some of your most memorable moments you have had from filming season two?

A) We're not really that far into it so I hope there are a lot more. What struck me the most about season two doesn't have to do with any specific moment from filming, but rather with the feeling. We were here for maybe three months last year filming season one and it felt fast. Our hiatus is like eight months long so you never know after eight months if you are going to come back and it will feel like home again or if it will feel awkward. It's felt so much like home though and we really have an incredible team. I know people say that all the time, but I'm not bullshitting! I'm actually totally blown away at how much everyone is on the same page creatively on this show.

Q) What do you think it is about the show that has made it such a popular program?

A) It hits a lot of different genres and they did a really smart job I think of casting people like myself (who has been on "Smallville" and brings a younger genre to this show) and Katee Sackhoff who comes from "Battlestar Galactica" and many other things. We kind of have a different fanbase than Lou Diamond Phillips has who has a little bit of an older fanbase, but also continues to work so well that he has a fanbase. Our lead, Robert Taylor, is an Australian actor who isn't that well known in the United States and I think that brings such a great change to television because you are not watching the same person that you have seen on a lot of other shows. So, your suspension of disbelief is different. You can kind of believe this guy is Walt Longmire since you haven't really seen him much. Then, you have Bailey Chase and Adam Bartley playing deputies with him and the two of them are a dangerous duo of comedy and great acting. Then, they have Louanne Stephens who was on "Friday Night Lights" and she is just a phenomenal actress! Even though she is not on the show as much, she brings such talent to the show. They really did a great job of lining it up and it speaks to a lot of the country that people don't make shows about. There are shows about people who live in New York and people who live Los Angeles, the flashier stuff. This is a real show about people who live in the middle of America and I think that maybe they are excited to have a real crime mystery centered around people they can relate to.

Q) You are very active on social networking sites like Twitter. What kind of fan feedback have you been getting about the show?

A) I'm on Twitter and I look at the Facebook page that A&E made for the show. It just seems like a lot of excitement and a wanting for more. I know that A&E doesn't have that many scripted shows and it feels good to break through the barrier for them a little. Last year, I think "Longmire" and "The Glades" were the only scripted shows on A&E and now they have two additional shows coming out. It's really fun to see the network grow in that way. Fans just seem to want more and that's a great thing!

Q) What would you like to say to everyone who is a fan and supporter of you and your work?

A) Thank you! I'm totally blown away every time I get those waves of love over social media or someone will stop me in the airport to say they like some of my characters. It brings me a lot of joy to be able to entertain and maybe help people relate to different characters that they wouldn't before. Human interaction is really important and that seems kind of contradictory given that I work on a television medium. Hopefully, when people watch my characters and other characters played by entertainers that they love, it shines a light on different relationships and maybe shines a light on their own relationship and how they can better communicate and understand.

I had the pleasure of talking with Cassidy Freeman, star of A&E's Longmire. She plays Cady Longmire, Walt's pride and joy, his only child. While talking to Cassidy, I got the vibe she encompasses everything we all strive to achieve. She was knowledgeable, humble, down to earth and surfs all over the world. What more can you ask for? Cassidy you're welcome to come down to the ShareTV office anytime!

When did you officially start your acting career?

I was raised by two lawyers, so they thought I was a crazy person when I expressed my passion to become an actor. But, I do have two older brothers who are both actors. From a creative point of view, the road was slightly paved. I started acting in Opera in Chicago when I was about 7 or 8 years old. I actually had an agent as a kid for film and television. I came close to a lot of stuff but never booked. As a kid, it was very heartbreaking. I then closed the door on film for a little bit and stuck to plays during my high school years. From there, I attended Middleburry College in Vermont and studied theatre. The next step was moving to Los Angeles to pursue my dream. If you were to consider making a living the start to a career, then I would say that started with Smallville in 2008.

Which genre do you prefer working in?

How do you like filming Longmire in New Mexico opposed to filming Smallville in Vancouver, British Columbia?

The climate adjustment was definitely something I had to get used to. For Smallville, you're in the beautiful wet forest at sea level in Vancouver, BC. You go from that to filming Longmire at 7,000 ft with Piñon trees and drinking 8 gallons of water a day. New Mexico is beautiful in its own way though. While it is dry here in New Mexico, the snow is like nothing else you've seen. Absolutely beautiful.

What advice would you give to kids who want to act?

I would say that there is no right or wrong or even specific way to get into this business. You will never know when a break is going to happen or how it will happen. To make it, you have to have a really great sense of yourself. You have to find joy out of doing what you love, even if you're not "making it" yet.

Who was your role model while you were growing up?